Swimming with Whale Sharks, Without a doubt my absolute most favourite adventure!!!

When travelling on Australia’s West Coast from Perth up to Exmouth, I had the chance to swim with whale sharks. It was  a once in a lifetime opportunity! Accompanied by a small group of people, we didn’t hesitate and  sailed out into the blue waters of the Ningaloo reef…

Whale sharks breath through gills and have cartilage instead of bone and therefore they are a type of shark and no whale. They have a length of approximately 7-12 meter, they can weigh over 20 tons and  are one of the largest living fish species. Luckily they feed on algae, plankton and also on small fish. They inhabit in tropical, warm seas and they live in open sea but not in the greater depths of the ocean… 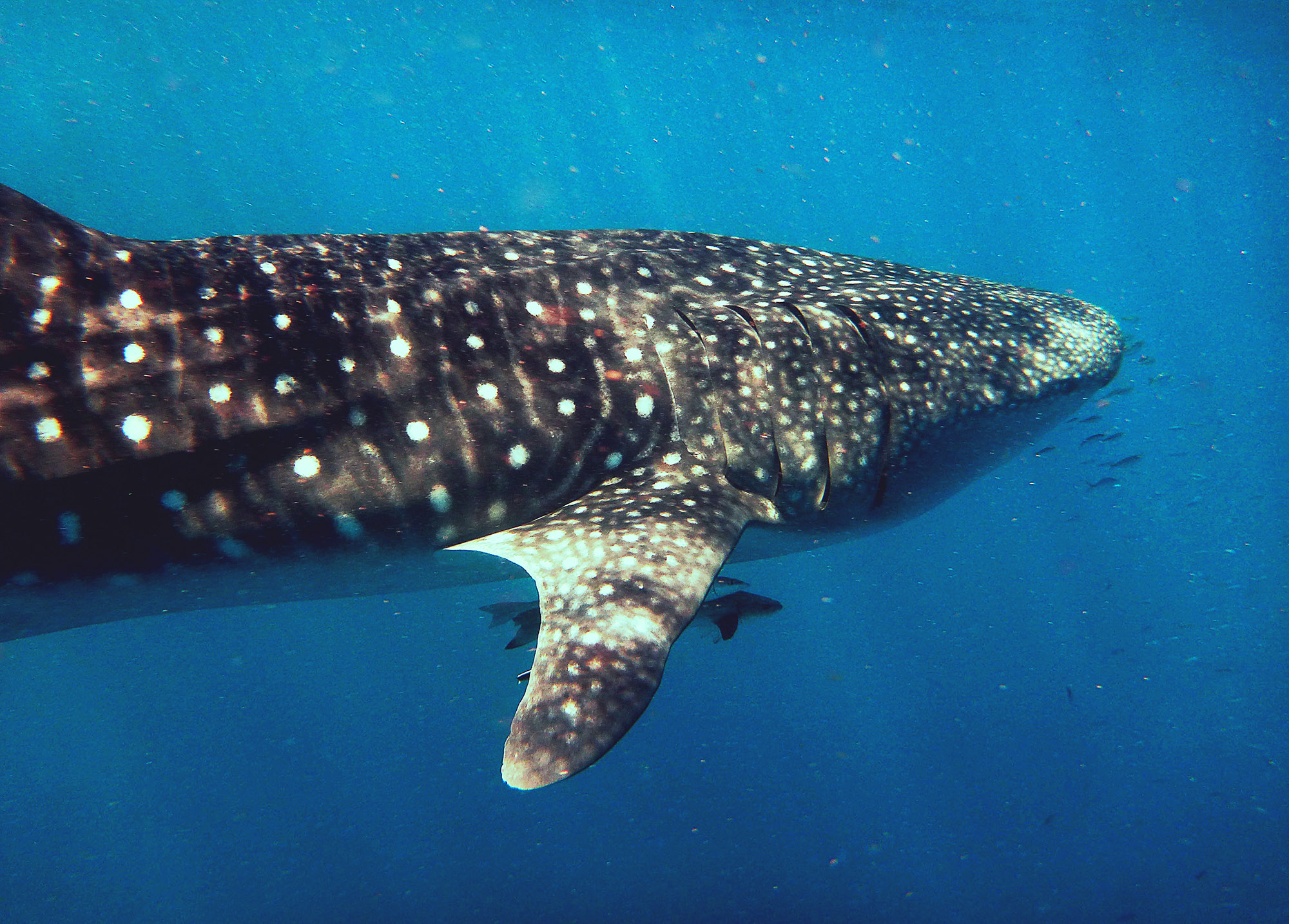 Once the boat reaches the spot, there is a helicopter who spots them for you and communicates with the crew where to find the whale shark. Next up we got our instructions. We were told to keep a distance of minimum 3 meters when they got close. So first our supervisor also known as ‘the spotter’ went into the water. He then pointed out when we could get in and where to look for it. Once you saw it, the trick was simple.. keep up and enjoy the view and experience.

The first time I was absolutely terrified! What was I thinking going into the wild ocean swimming next to a creature triple my size.
The sea was rough and you had to put a lot of energy in just keeping up.  All I could think was swim, make the most of it and go!!!

So as I was trying so hard to get closer and keep up with this huge animal I almost forgot to watch and enjoy the whale shark.. The first one was so overwhelming and was so quick that after a while, I saw I was the only one still going for it. I was immediately sorry I had been so stubborn to put al my energy into the first swim! Once I had noticed no one was following I stopped…

Then comes the scary part.. the boat who is supposed to pick you up seems miles away and because of the big waves you are bouncing up and down in, you seem like a tiny little fish. The fact that my wetsuit was darkblue didn’t help either!
So I tried waiting patiently and tried to keep calm. After counting the people on the boat they will turn around to pick me up I said to myself, while focussing on deep breaths!
It seemed like forever waiting there in the middel of a rough patch of the ocean. Gargling salty water and doing my best not to imagine what could be swimming in the water below me!! 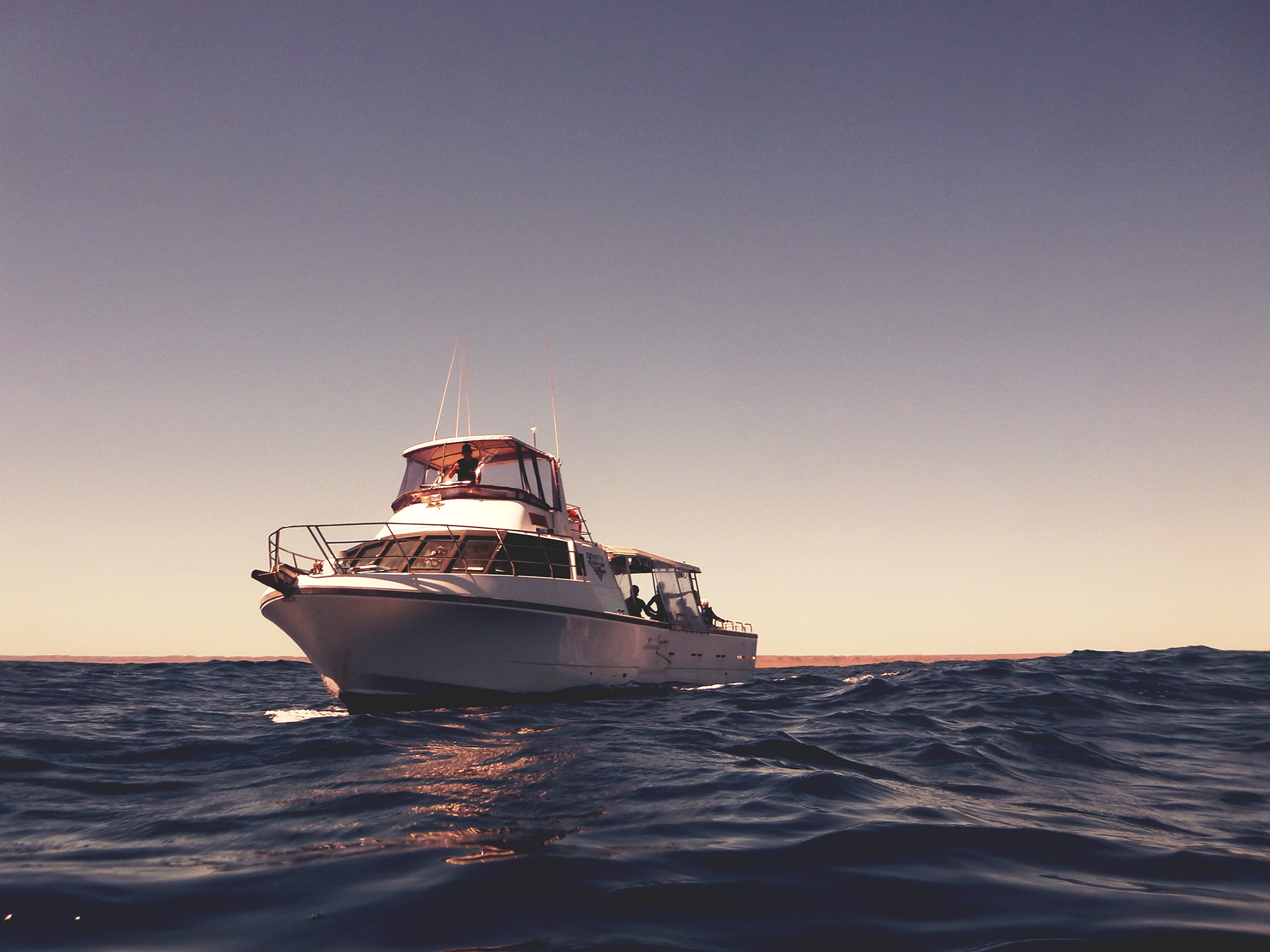 Finally they picked me up and I was sure not to do that again next time!
After that little panic attack and a short break on the deck, it was time for round 2…
Lucky for us the next whale shark swam rather quiet and was easy to follow. I got the chance to swim right next to it for what seemed a long time.

When I looked beside me it dawned upon me how quiet it was underneath the surface of the ocean. Here I was in the presence of this Giant Beauty who didn’t even seem to mind my company. 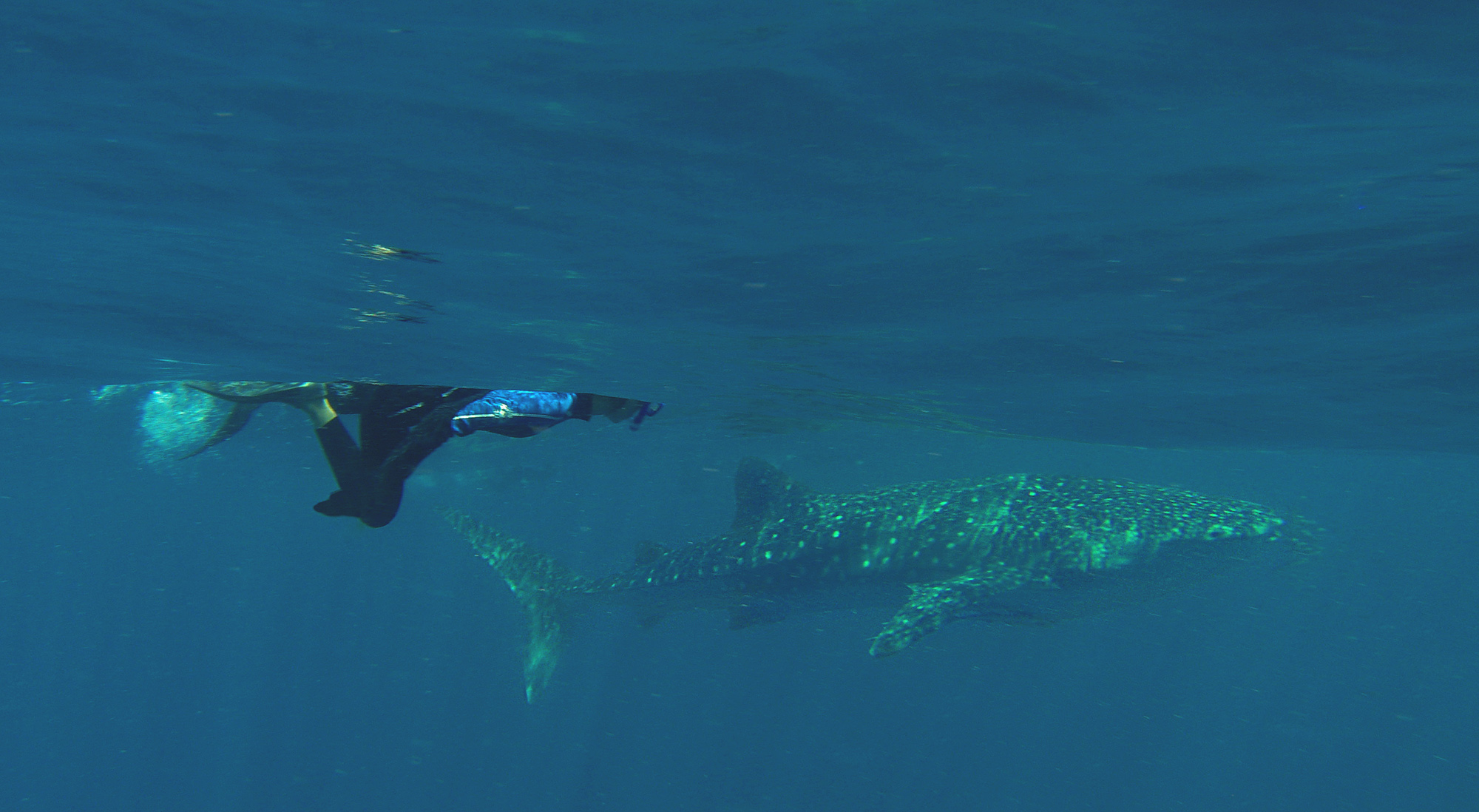 I can not even try to explain what I felt.. Adrenaline rushing but yet I was feeling so calm and at ease. Every fear disappeared it was not frigthening at all! I was struck with admiration of it’s beauty and greatness!
After doing a bit of research, apparently there is no accurate estimation but the IUCN consideres it an endangered species. Taiwan, India and the Philippines banned all that has a commercial purpose regarding whale sharks (fishing, selling, import and export). Now the only places you can actually swim with these wonderful creatures are Australia and Mexico. 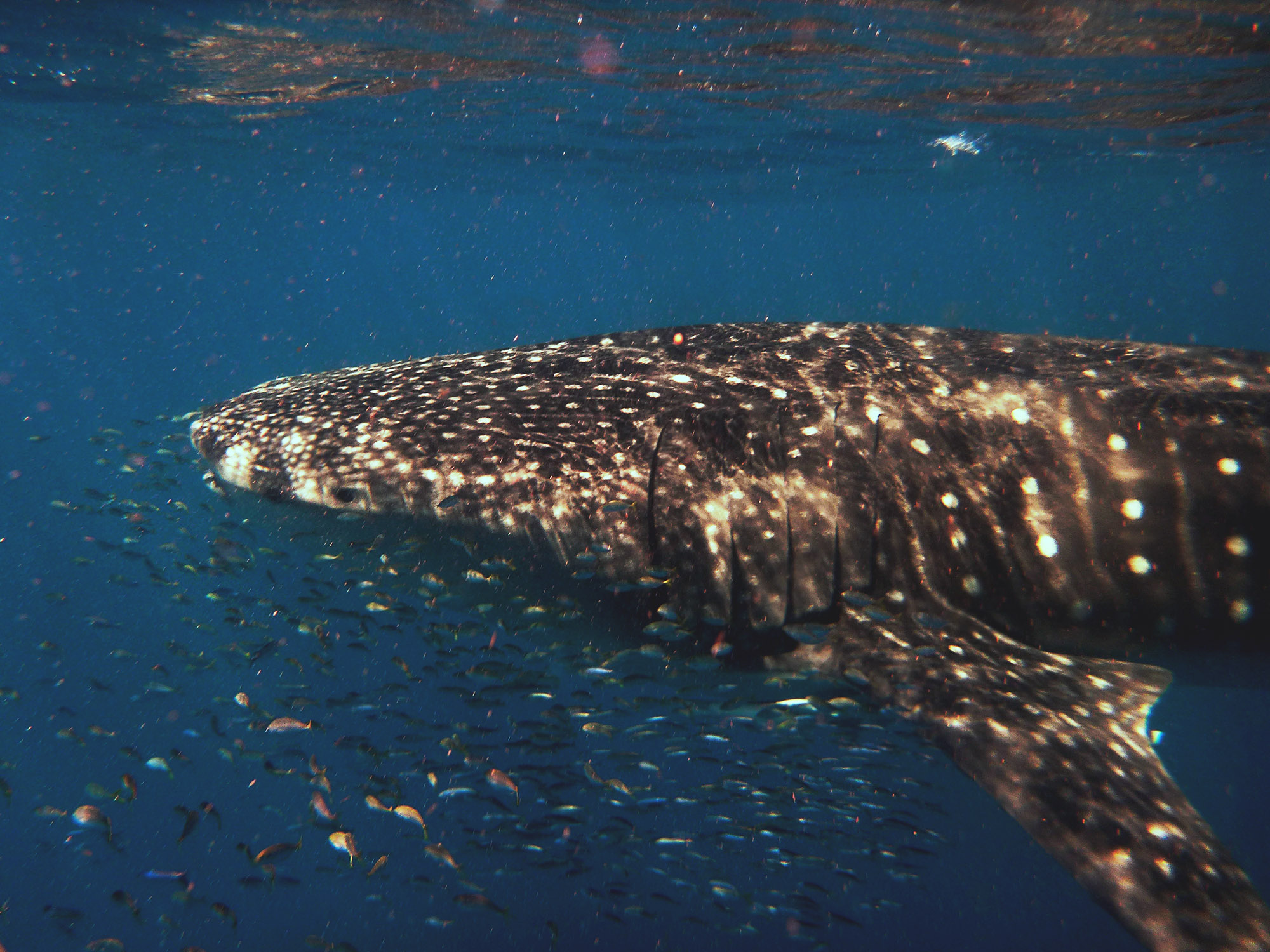 All this  makes me wonder if it is in our right minds to disturb these animals the way we do. They are part of a very expensive tourist attraction. And it may not seem like it but all of this human attention may upset them  and infiltrate their habitat more then we know. So other then for research it might be be best to leave them be..

What Can we do to help Whalesharks from being endangered?

The fact that I did the tour was a rather impulsive act. The opportunity was then and there and possibly never again. Thinking about it now and after researching these wonderful animals, I think this form of tourism does disturb them,  sometimes they even get hit by the boat propellors and we as human creatures swimming along next to them and sometimes their babies might interfere with their feeding and their peace of mind. I was very greatful for the experience but I would not do it again unless you are sure to do it, with an organization who puts the money from the tours actually into research and protection of these beautiful endangered animals.
To come clean with some of my guilt issues about this “I adopted a whale shark” on the WWF website to support ongoing research and protection of the animals.  For your money donation you get an adoption certificate,  a photo and a species card. If you are interested: follow this link.

Australia and its Ningaloo Reef Marine Park play an important role in the ongoing research, conservation and protection of these magnificent species. I am glad I did the tour with them! They also educate and learn their customers whatever there is to know about the whalesharks during the tours. The WWF tries to ensure whale sharks stay safe during their frequent interactions with tourism. 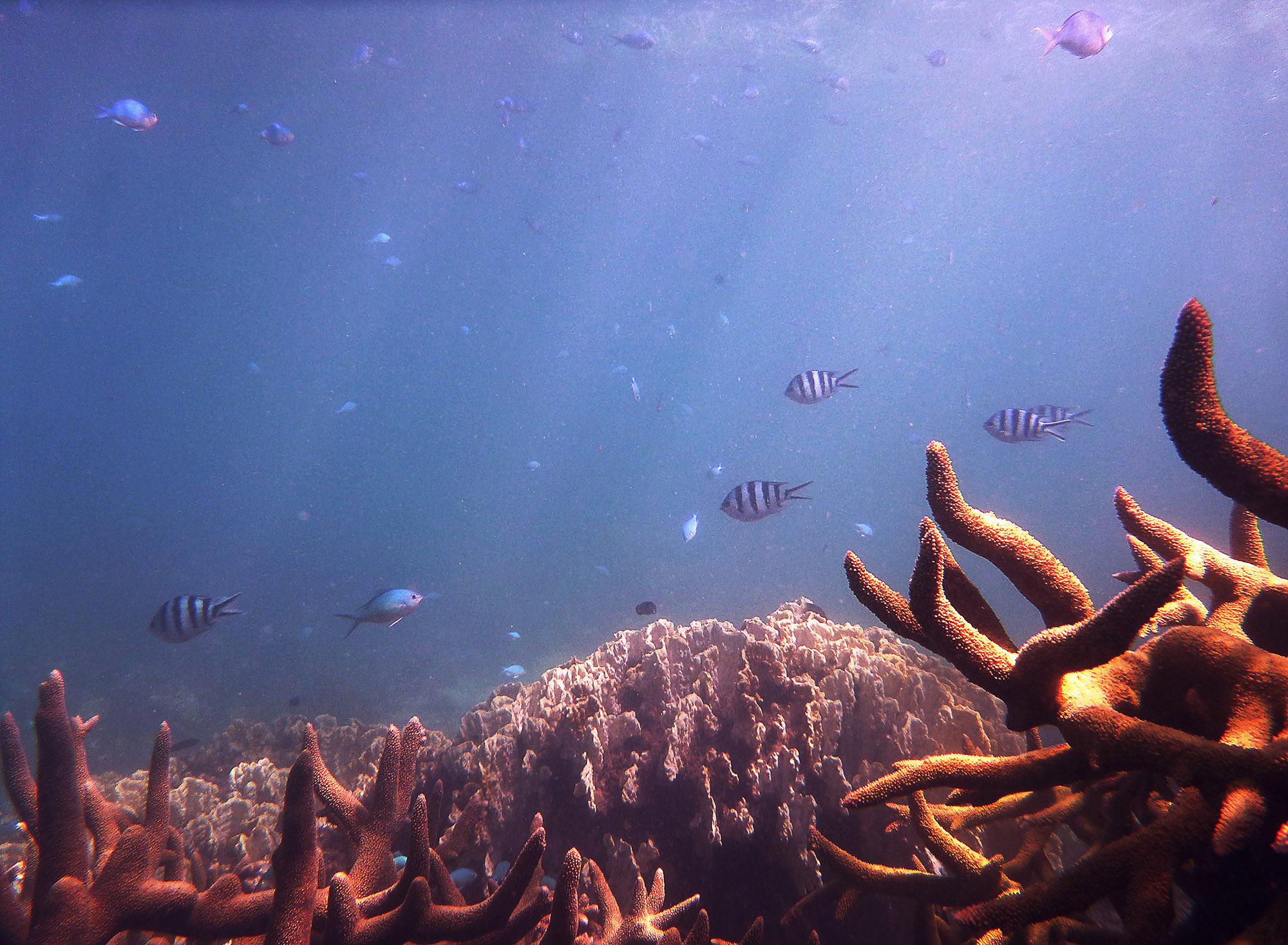