We took the boat from Padang Bay to Nusa Penida. It takes you only 20 minutes from mainland Bali. The Nusa Islands are a group of 3 consisting of Nusa Lembongang, Nusa Penida and Nusa Ceningang. We choose Nusa Penida which is the biggest island and more importantly because it is less touristic then Lembongang and Ceningang.

You can do a day trip To the Nusa islands from Bali but in our opinion you should at least stay a couple of days to explore it properly. there are almost no cars on the island but lots of scooters. We hired a scooter in our resort ‘Bintang Bungalows’. It was fueled up but it didn’t include any helmets. Driving on it’s very harsh roads I kind of worried in the beginning but with the heath it is also nice to just have your head in the wind. 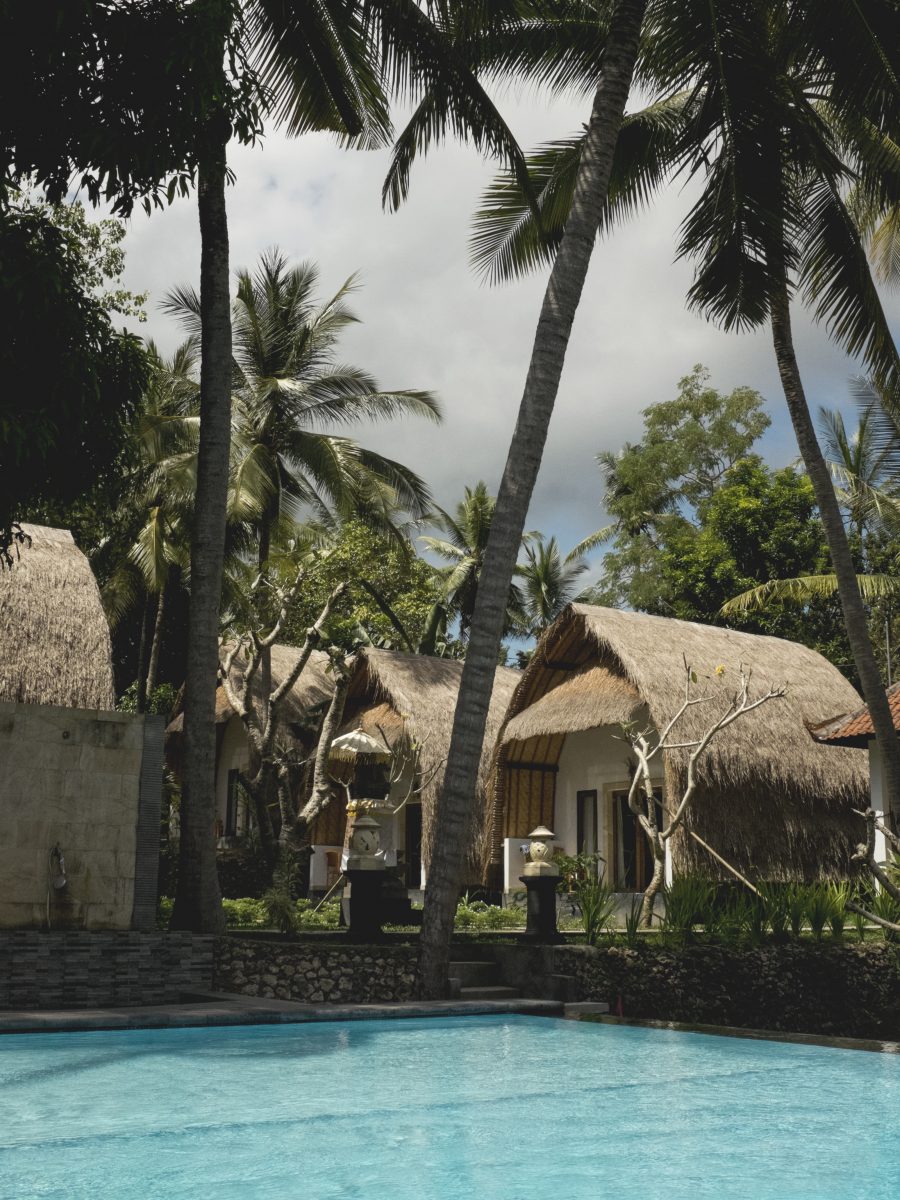 On our first day we visited crystal bay, on the map it was very close by our bungalows, basically we just had to head down.  The road starts good but quickly evolves into a dirt road with a lot of holes and bumps, the first couple of meters were fine. But as you arrive at the last 2 or 3 turns it got so steep I had to really kling onto Benny to keep myself from going overhead! Praying for no opponents and that we would make it down safely, I squeezed Benny so hard and with an occasional scream I was sooo relieved we made it down safe and sound!!

When you drive into the bay, you instantly forget the fear. The scenery is breathtakingly beautiful. And like it’s name Crystal Bay indeed had crystal clear water and a very nice beach which wasn’t too crowdy! After a snorkel we drove back up the crazy road to relax a bit in the Bintang Bungalows. 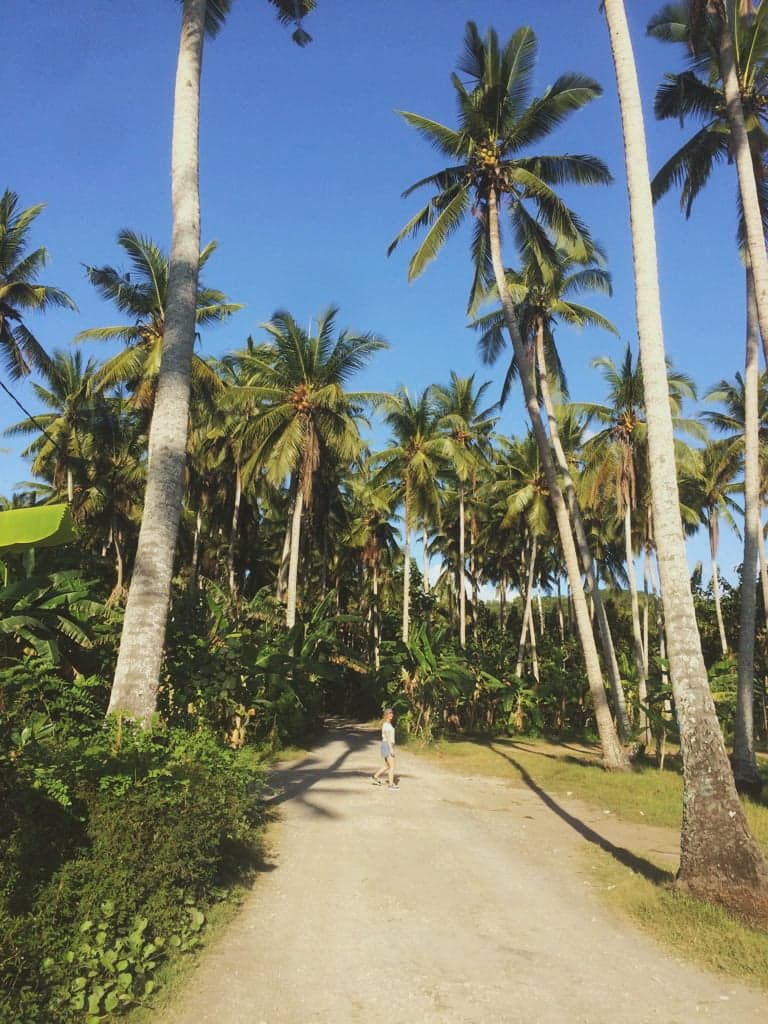 On our second day we drove to Broken Beach and Angels billabong. Again we had a 1,5 hour drive starting on good roads but the more you got close, the more bumpy the off-road tracks were. Angels billabong is an amazing spot, you can chill in this nature shaped giant bath tub with an ocean view! Unfortunately you are not the only ones visiting these beautiful spots so again our tip is “the early bird catches the wurm”! Because lining up to take a picture in a so called beautiful nature spot is kind of a bummer! 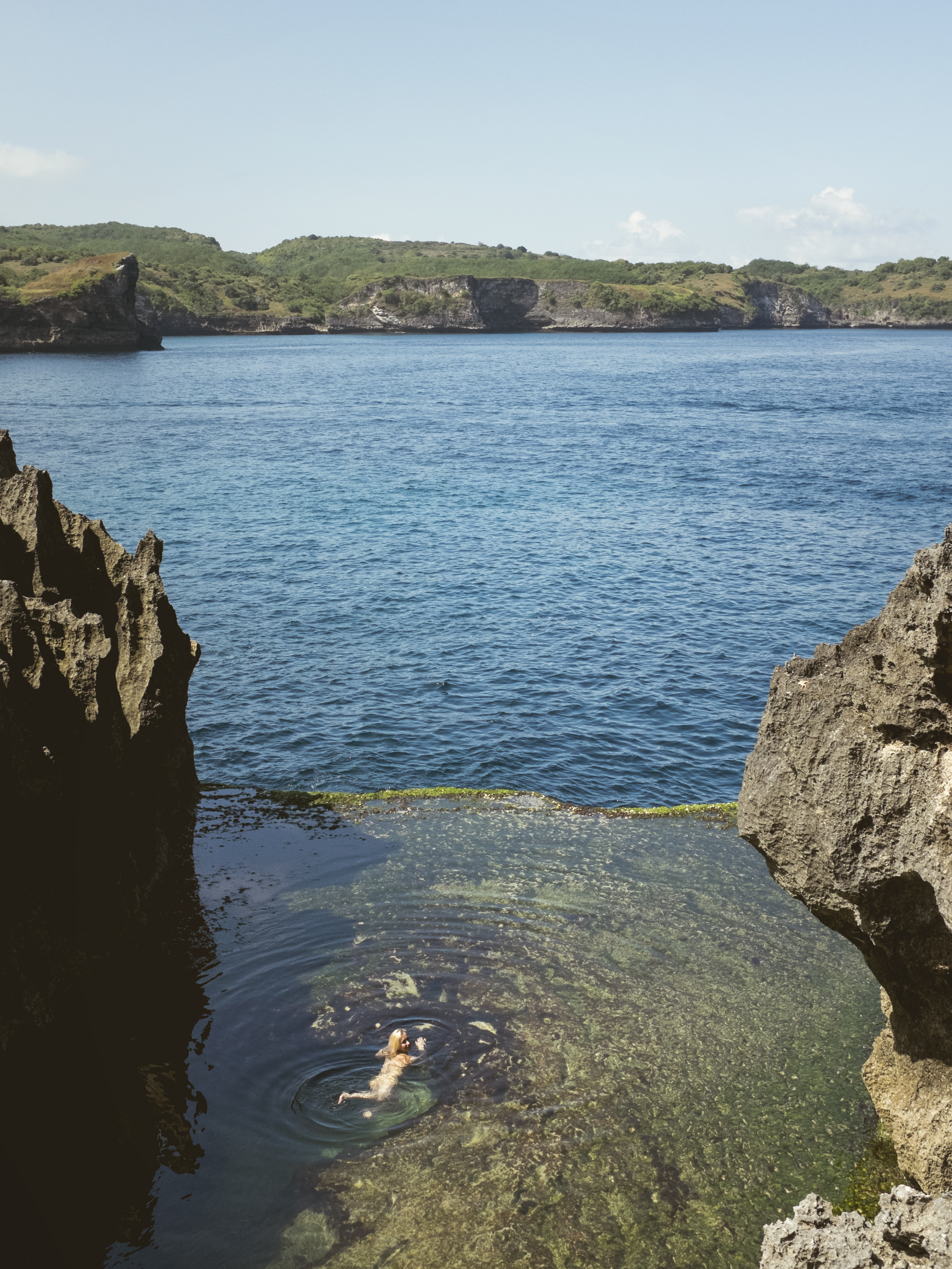 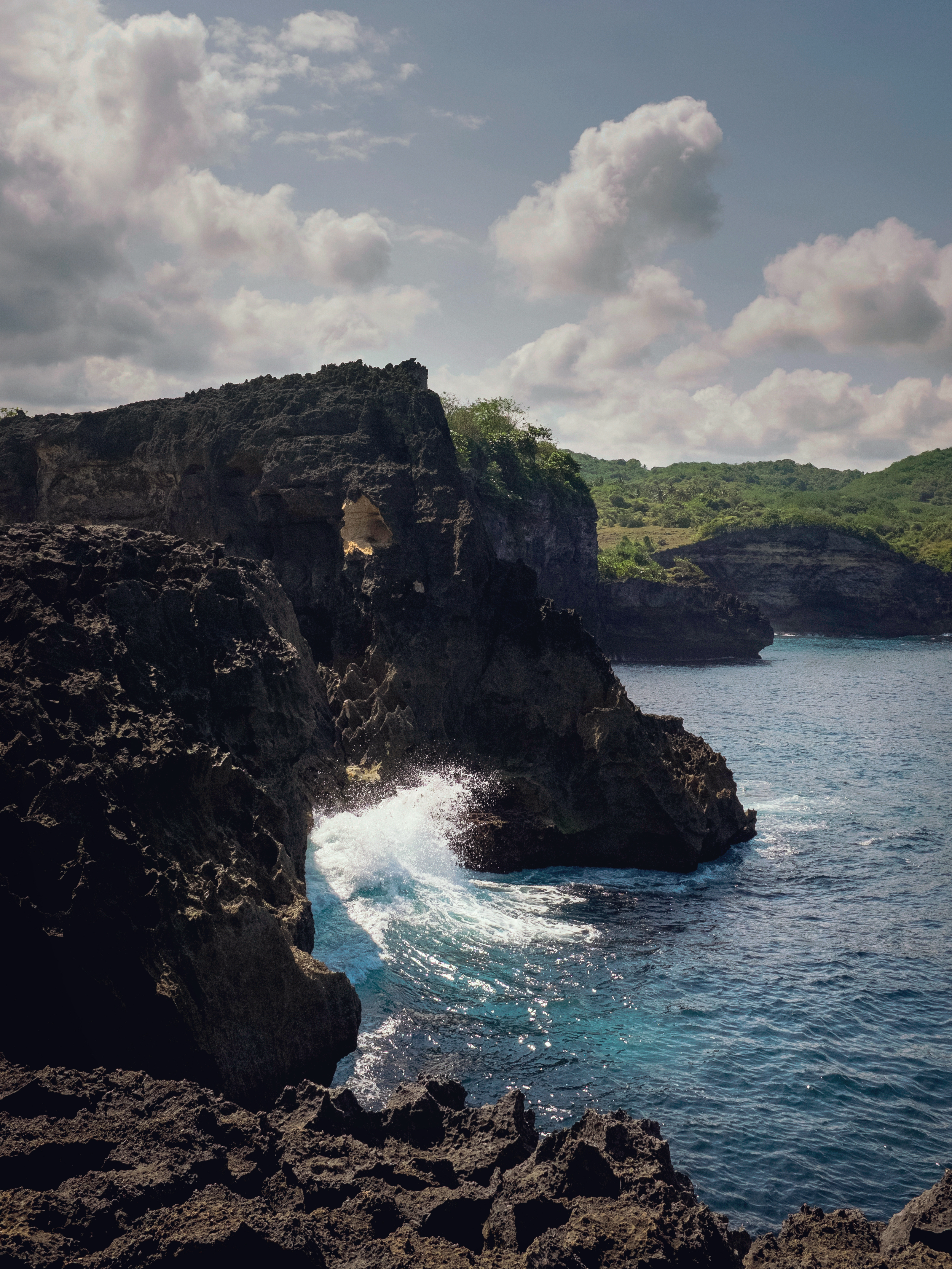 Broken beach is only a ten minute walk from Angels Billabong, beautiful scenery and the perfect place to get the drone out for the very first time! We were so exicted! After let’s say 15 minutes of fun flying the unimaginable happened!

Blinded by the sun, we lost sight of the drone and also the gps signal got lost for a couple of minutes. Searching desperately we were terrified we lost it! Suddenly the gps signal showed us a spot down at the shore of broken beach! We looked down and saw a tiny light flickering! Now we knew, it definitely crashed against the rocks and fell down! It did not take us long to realize that it was now still dry on the rocks, but it was only a matter of time until the tide would rise! 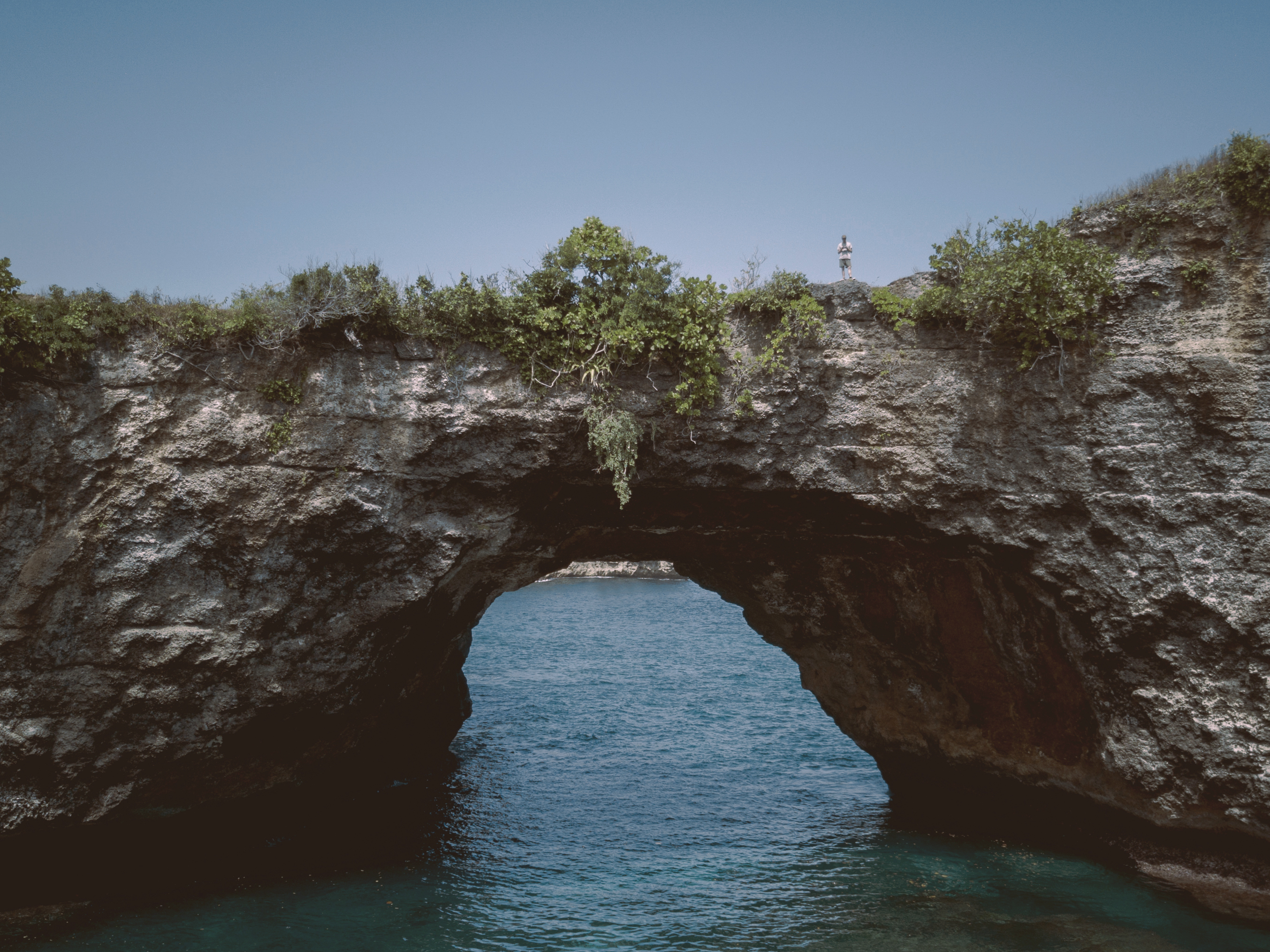 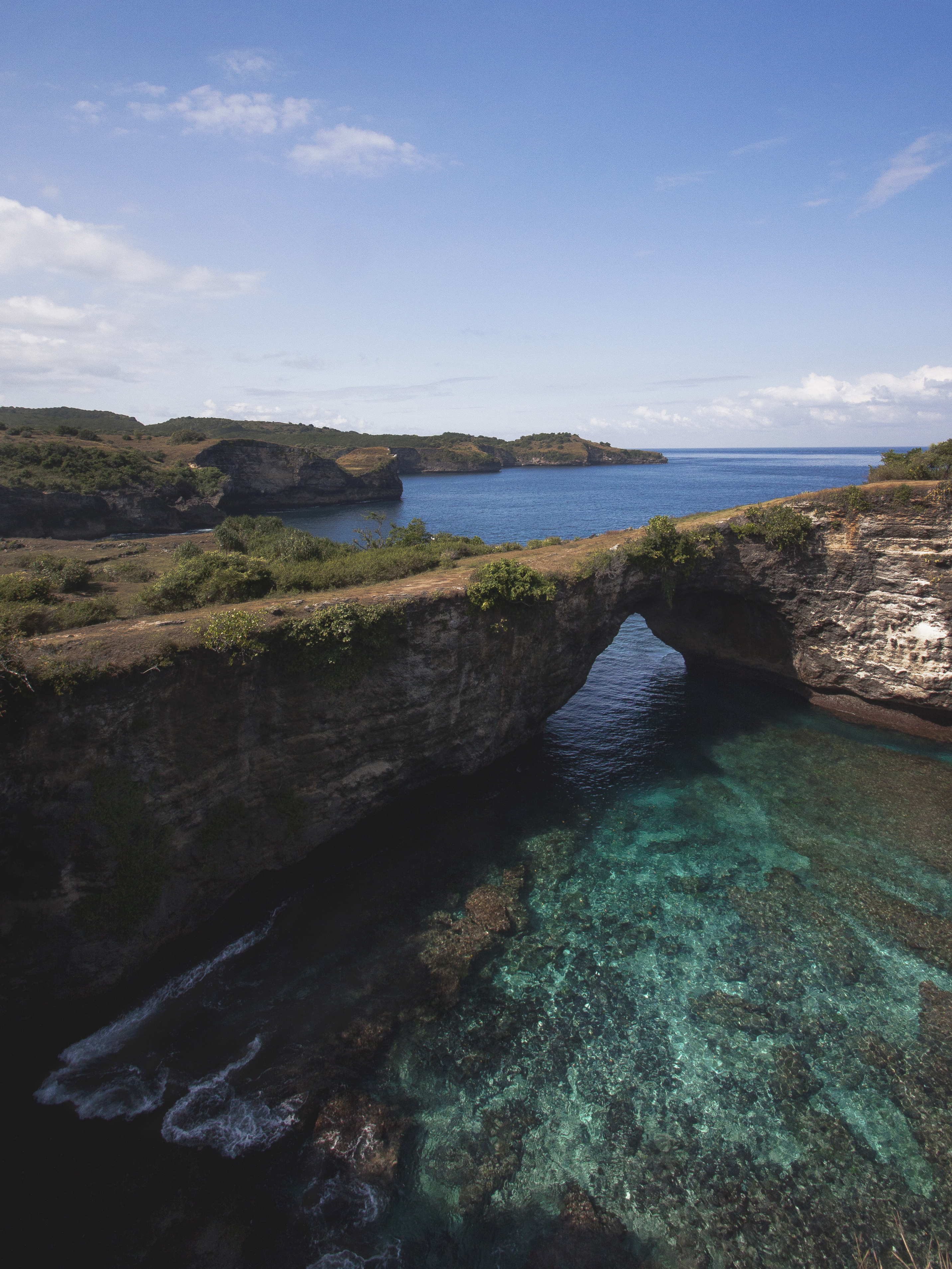 I ran around like a crazy person to talk to local people, asking if there was any way to get down there quickly?
“No!! They screamed you can not get down, it is suicide!” I told them it was not our plan to just jump from a 100 meter cliff into the ocean to go get the drone but if we could maybe reach it by boat from somewhere? We had to get back to crystal bay, that was the only way they said.

After talking it over for 1 minute we decided if there was any chance we could make it, we had to leave as as soon as possible and we should at least try! After all we only purchased the drone just recently!
I knew that Benny drove very very slow the last hour to get here because of the bad road conditions and its danger and most of all because I was terrified. I now realized that I just had to shut it and be brave! So I held on to Benny very tight and I swallowed my occasional fear screams because he had to hurry back all the way to Crystal Bay! I kept assuring myself of his driving capabilities and  that everything was going to be just fine!

Arriving in Crystal Bay we rushed to the guys who were so keen on selling us a boat ride the first day we were here. We explained our tragic story quickly and begged for someone to take us. They were all hesitating because the tide was already rising and the drone would have possibly drowned by now. One of them couldn’t resist our sad and anxious faces and decided to take us with him! We rushed to the boat with a snorkel and flippers.
Arriving at broken beach from sea the scenery was also amazing, so beautiful but also really rough. The captain told us he couldn’t take the boat further in because of the rough sea and strong current. We would risk smashing it into the rocks!

Our captain told Benny he should swim from here but also that he had to be a strong swimmer! He advised him to take a big bucket to keep the drone dry whilst swimming back! He looked at me and suggested to go himself because he knows the ocean and the currents, he asked me and Benny if we could manage to keep the boat steady in the mean time. I was terrified only because he asked! We were jumping up and down in the water and he was constantly adjusting the boat to prevent it from going further towards the cliffs. I looked at Benny and said it was crazy, we had no experience on a boat or whatsoever. It would be a very bad plan for the captain to leave the boat! Benny agreed and prepared himself to jump in!

Because of the current it didn’t take him longtime to arrive to the shore. The tide had risen already big time, so he had a real struggle getting out of the water because he was constantly kicked into the rocks with every wave. Terrified I was watching and praying he would get to the drone without getting hurt!

After a while, he managed to reach it and jumped back in. I saw him struggling to swim back against a strong current! He had to keep one hand stretched out of the water to keep the bucket with the drone out of the sea and dry, which made it even more difficult to swim! I was so so so relieved when he made it back only with a couple of scratches from the rocks!! He was exhausted but so happy he was able to save it! Off course it didn’t work anymore which was very sad for the rest of our holiday but back home in Belgium we managed to repair it for 100 euro’s!

So even though it was real hectic and frightening… it had all been worth it!
After this super crazy adventure, we arrived back to Bintang Bungalows exhausted but smiling! What a day it was!

Day 3 we went to kelingking beach! Awesome view on top of the so called T-rex! This scenery is breathtaking! It made me feel so small! What a stunning place! We decided to follow the track down which took us approximately 1 hour but it wasn’t easy! It was still before midday but the sun was already very strong making it incredibly hot!

The first part of the track is ‘normal’ but after a while it becomes very steep and rocky! At some parts there is a self made wooden ‘fence’ preventing you from death if you were to fall or slip. It was a crazy way down but the view once we reached the beach was sooo rewarding! I remember it felt so unreal, for the first time we were alone on this huge crystal clear beach with giant waves forming and crashing very roughly onto the shore being the only sound you could hear!

We felt so lucky to have been able to witness such a beautiful part of nature.  True paradise found, definitely in my top 5 experiences so far! After enjoying the beach and running out of water we knew we had to start our journey uphill again! 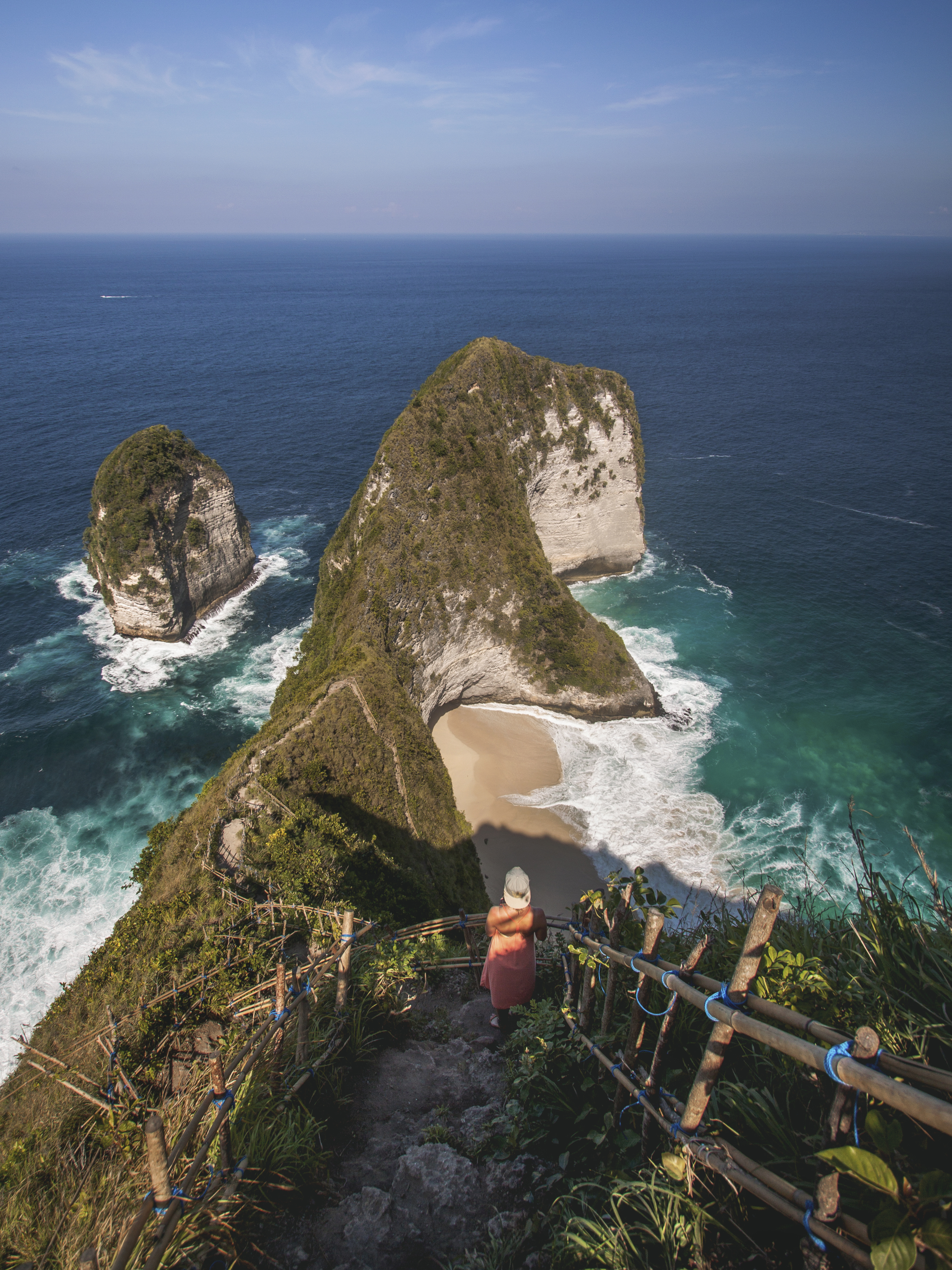 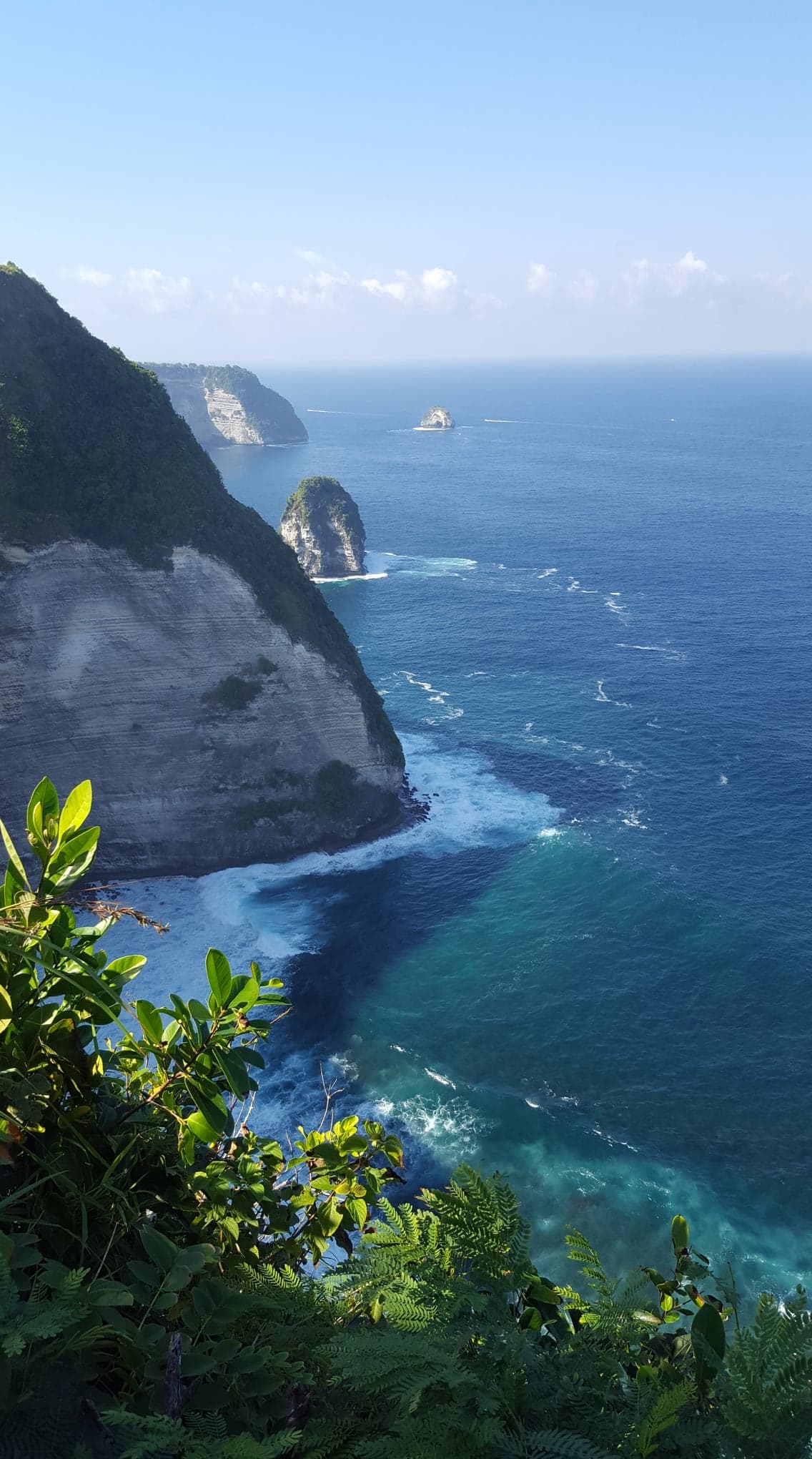 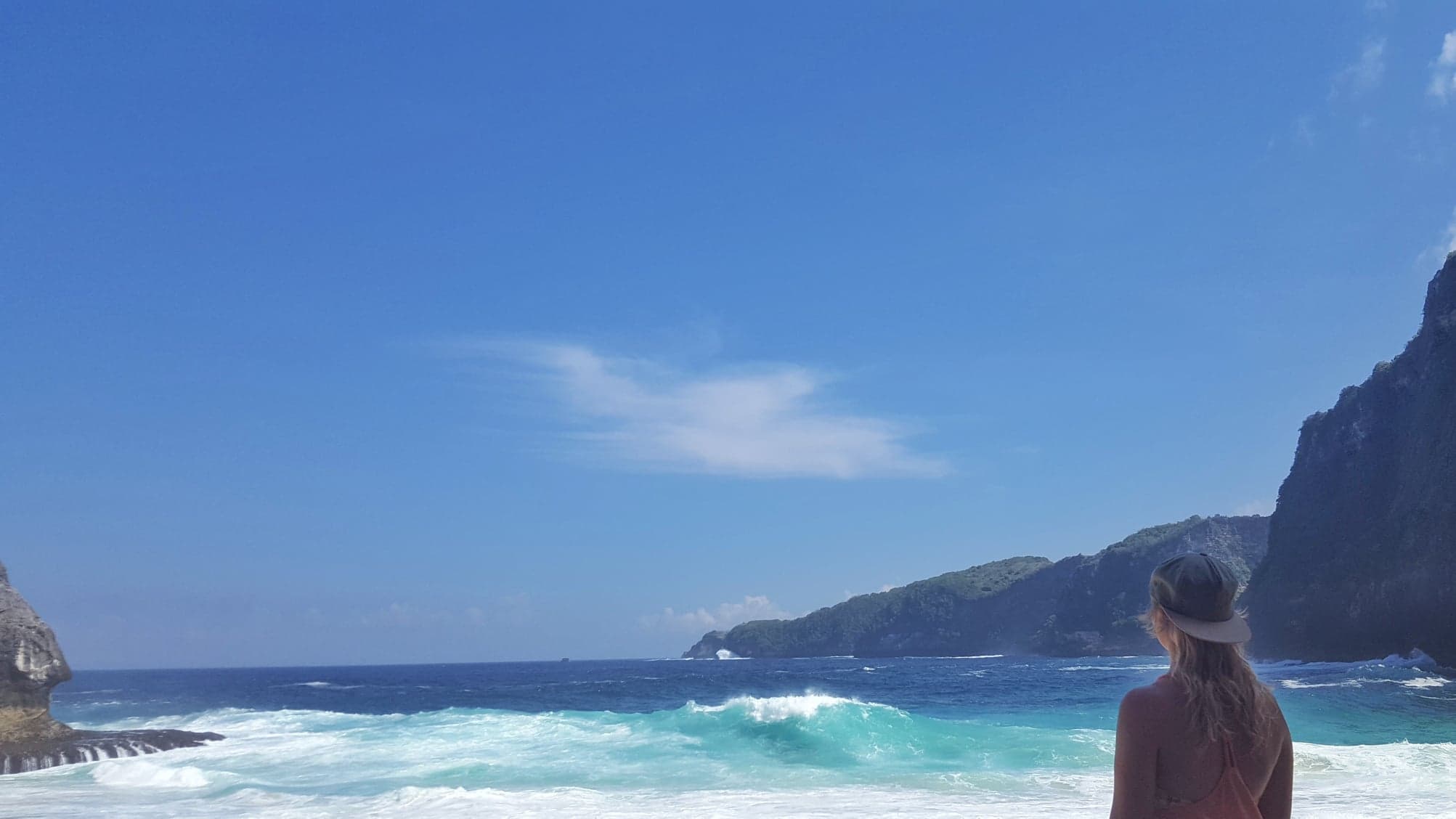 Exhausted but so happy we had made that decision we arrived back on the top! We stopped at a little Barack from an old lady selling sweets and water. We took a rest and rehydrated in the shades of the Barack! All of the sudden we saw our first snake on the island. As scary as it seems we were to exhausted to be really afraid! 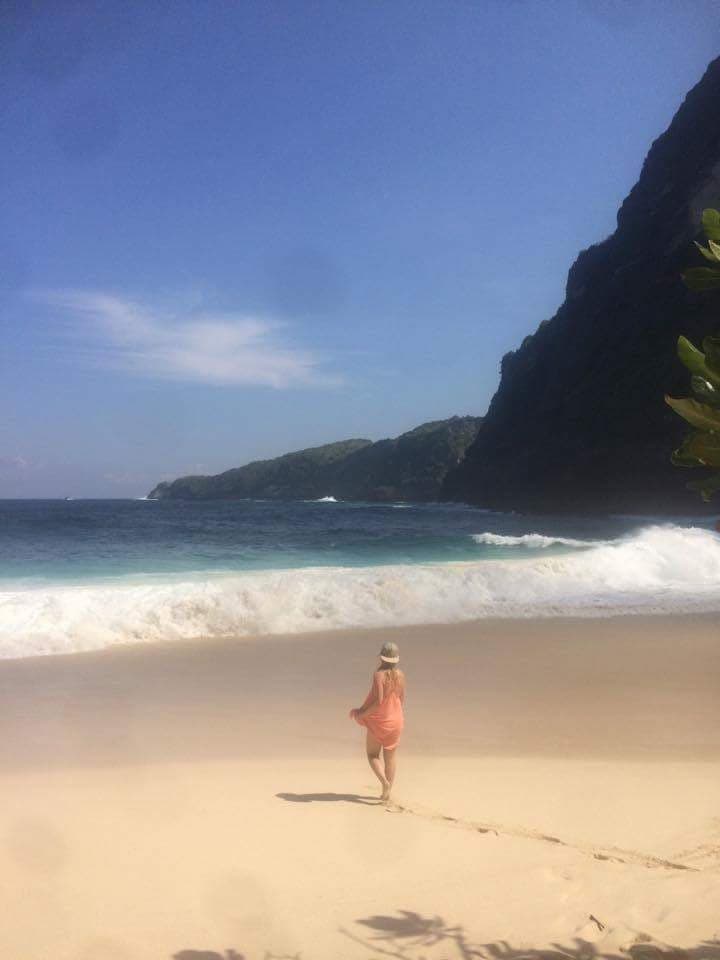 Our last day on Nusa We took a boat trip to visit the Mangroves which are on Nusa Lembongang. Beautiful moisty scenery and really nice to visit and experience. Although coming across lot’s of other boats visiting the Mangrove made it’s nature a lot less impressing!

After 3 days on this lovely green island, we headed back to Bali.

where to Stay in Nusa Penida:

Other activities on our wishlist we were not able to reach due to a lack of time:

If you are interested in more information on Bali, check out:  A 3 week itinerary for Bali and surrounding islands