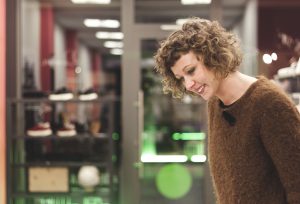 I met Lore a couple of years ago. She was friends with my niece and we went to see her graduation collection in Eindhoven. That was the first collection of Lore I got to know. Back then I already loved her creations! When I had to interview a jewellery designer for my 1st year goldsmith course, Lore immediately crossed my mind. I didn’t even look further because I really wanted to hear how she had been doing and what kept her busy at the moment. After googling a bit, I figured she would be in over her head with projects and interviews. When I asked.. she agreed to talk to us right away. Although she was very busy, she invited us for coffee and a conversation in her lovely apartment in Hasselt. She was so friendly and open about everything we asked! I was impressed with the way she was handling life as an artist! 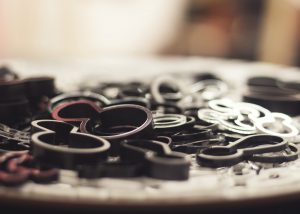 Throughout the conversation it became clear that she is so much more than just a jewellery designer! Lore Langendries is a vibrant, bubbly and extremely creative young women who was born and raised in Zonhoven (°1988). Currently she is based in Hasselt, capital of Limburg and known as the city of taste.

From Highschool to Doctor in arts

After finishing her PHD in 2015 at KU Leuven, U Hasselt & Mad faculty, she can now call herself Doctor in arts. She lives to create and design and sees herself as a maker of all kinds!

High school years were trembling for Lore. She was a very promising basketball player in her youth and her upcoming talent led her to an Athlete school of Sports in Antwerp. Unfortunately injuries kept her from making it through, so she returned to Zonhoven and finished up high school there. After this she initially wanted to study fashion in Maastricht but that didn’t work out as planned. Her parents who are both interior architects were a big support for Lore. They kept encouraging her and she decided to start jewellery design at Mad faculty in Hasselt. The first year was extremely difficult to adapt but her parents were very supportive and helped her get through. She had to work hard for it and passed from one deadline project to another.

After 4 years of Uni she became Master in jewellery design. After that she was offered the chance to start a PHD study and so ‘Hunacturing’ was born. 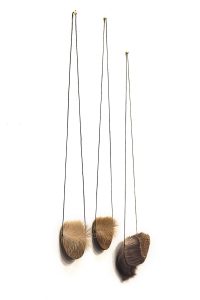 It combines both nature and manufacturing. In her PHD she researched the interaction between the manual and mechanical process in terms of completing both unique and serial objects. Studying reproducibility throughout an experimental approach, she also studied how behavior and qualities of materials and digital technology (laser cutting) had an influence on this process and she focused both on the tactile and physical aspects of a design.

The beauty in her research was that she designed new and unique pieces with a digital tool that was meant to be designed for mass production.

Using the animal skin she let the material be an active player in the creative process. The nature of the animal skin defined the uniqueness of the pieces. She used pieces from the animal skin that anyone else would throw out. For Lore that rare piece of skin just made the designs unique!

Her interests broaden further then jewellery only. She also loves to experiment and indulge in a lot of other creative things like fashion, fabrics and photography, … She is inspired by a bunch of things but she gets a lot of inspiration out of books and also loves the work of various artists like Mark Monzo, …

To be part of the creative process is an important value in Lore’s designs. The circle is an almost undiscussable form in many of Lore’s designs. The simplicity and purity of this geometrical figure intrigued her from the very start of her study and career.
She doesn’t really know yet what the future will bring. Ideally teaching would make life more practical and financially more stable. But she also loves the fact that she now finally isn’t caught up in her Phd anymore and can work on interesting projects of all kinds. She does not want to be seen just as a jewellery designer. She loves to collaborate with other creatives to experience new projects.

Her Style and work

Her style is rather minimalistic I would say, her designs come across as strong and real to me, each piece I think looks ‘luxurious’ but it is never too showy. The brooches for example are subtle in one way, being minimalistic in its form yet so strong and out there by the choice of a very delicate material; animal skin. It can brighten up or complete your outfit without being too prominent and I absolutely love that!

There is a tremendous quality to her work, each piece is fashionable and attracts attention through subtleties. As a designer of wearable and unwearable objects, she also shares her appreciation for beauty, her designs are meant to attribute beauty to the wearer. The relationship between the human body and the object is very important to her!

Where to Find a Lore Langendries 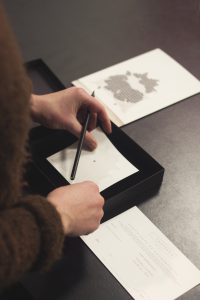 ll collections are handcrafted in limited edition to preserve the integrity of each piece. Her talent has certainly not gone unnoticed, you can enjoy Lore’s work in a variety of places. Abroad her collection is being sold in Melbourne and New York. In Belgium she has selling points in Gent & Antwerpen but also in Limburg. You can check out her collection or purchase a Lore Langendries at art gallery Multiple in Hasselt and also in Gallery the mijlpaal in Heusden Zolder.

At the moment she just finished an amazing collaboration project with Le chaperon unlimited, called “the Holstein project”. It is a wall piece consisting of a cowhide where out she obtained 366 individual brooches . If you buy a brooch you will not only have a unique designer piece of Lore Langendries but you will also become part of the Holstein family. Eventually  after the 366 days of selling these, they will bring together everyone who bought a brooch, as a family from this specific project and cowhide.

I had such a good time interviewing her! She was so friendly and open and despite her busy schedule, she took her time on a Sunday morning to explain everything we wanted to know with such passion it was contagious! I feel she is a compassionate, strong and very kind women. I had to write down her story because I absolutely love her designs and her way of craftsmanship.