Berlin, it was love at first sight! It is such a fascinating city with a million things to discover! Therefore I would like to share some of the best sights, restaurants and bars I visited during my trip, to possibly guide or inspire those who are planning to do the same thing.

One of my favourite scenery’s looking back was definitely RAW Gelände! It is about a 5 minute walk from Warschauwer Strasse Station.

By the time we were there, people were just getting of work and it was still rather empty so we had everything to ourselves to explore. We strolled around the crafty area’s of different sheds all with an other purpose. RAW(Reichsbahn-Ausbesserungs werk) used to be an industrial complex for maintenance and repair of railways systems and trains. This came to an end after the Berlin wall came down. It became a living and working community of sociocultural creatives, where nowadays you can find a very interesting scenery that contains bars and clubs, an indoor skate park and also a kind of hidden wall climbing hall. At the end there is this big field where on saturdays an sundays a huge antique market takes place. 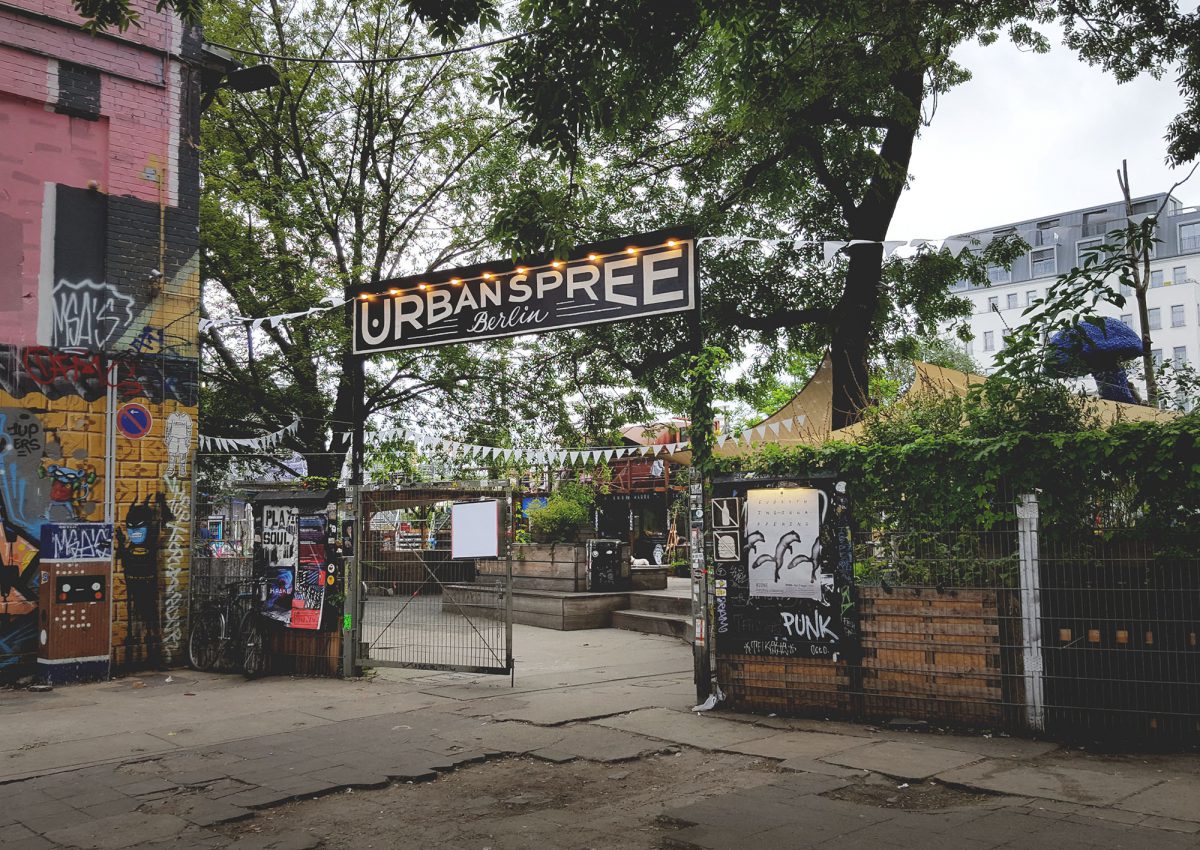 It even harbours a swimming pool. It is the perfect urban hide out! You find lot’s of creativity there. Its like a complex of craftmenship and creativity…it combines work, play and a chilled out lifestyle.

After exploring  we enjoyed half a liter of German beer whilst there was  a band setting up at this outdoor garden place.We were sure we did not want to see Berlin in a rush and even though this would be the only thing we had visited in a day we still decided to stay for the evening. We experienced a lovely concert of a 5 headed band. It was al so random that it was perfect. 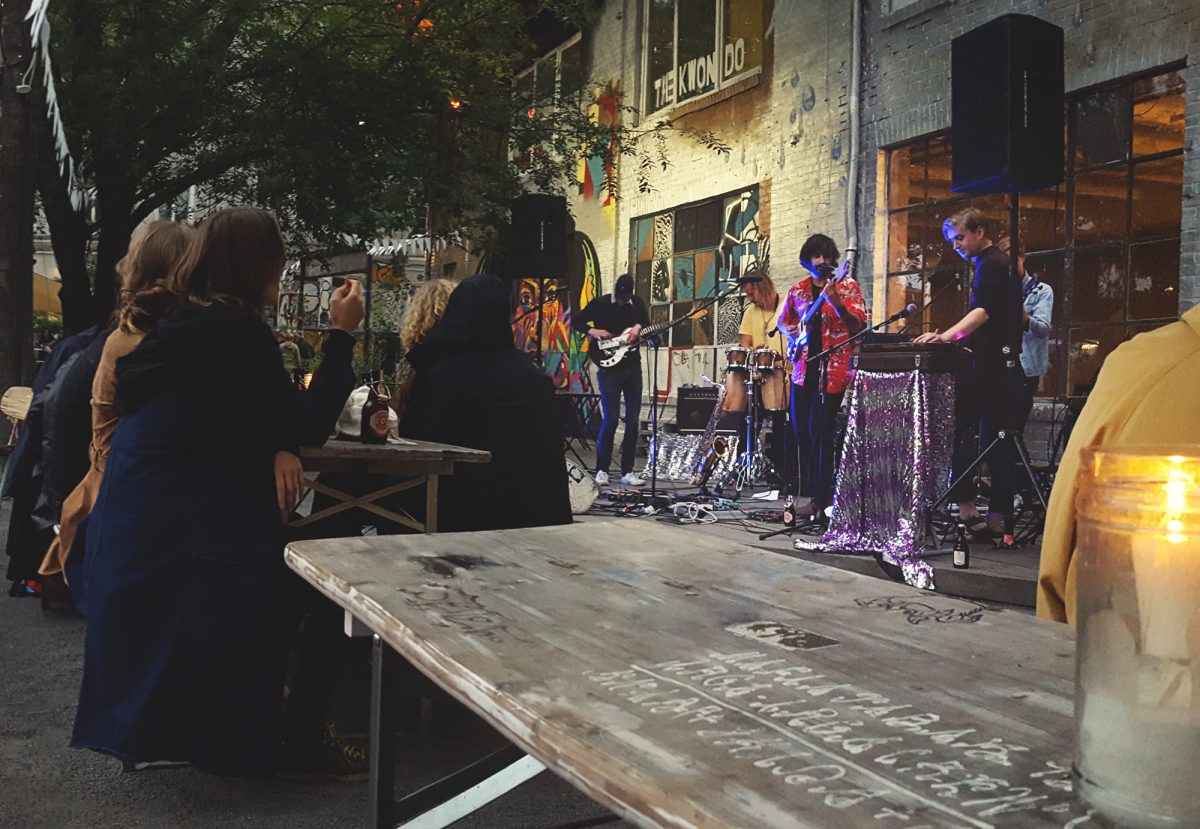 Next on your must-do list would be Tempelhof…We had the most lovely day in this former airport that now takes place as a huge park. You can rent a bike, inlineskates, go carts, segways and a bunch of other stuff to explore the area.

As we biked along the old landing way we came across a huge parkside where people were having a lovely barbecue afternoon and were just hanging out with drinks and food and more importantly, each other.They were having a blast! Children could play freely and parents could socialize. It is just amazing how this former airport gets a new destination. You can also visit the building itself and do a guided tour. The rest of the building is now used to set up refugee camps. 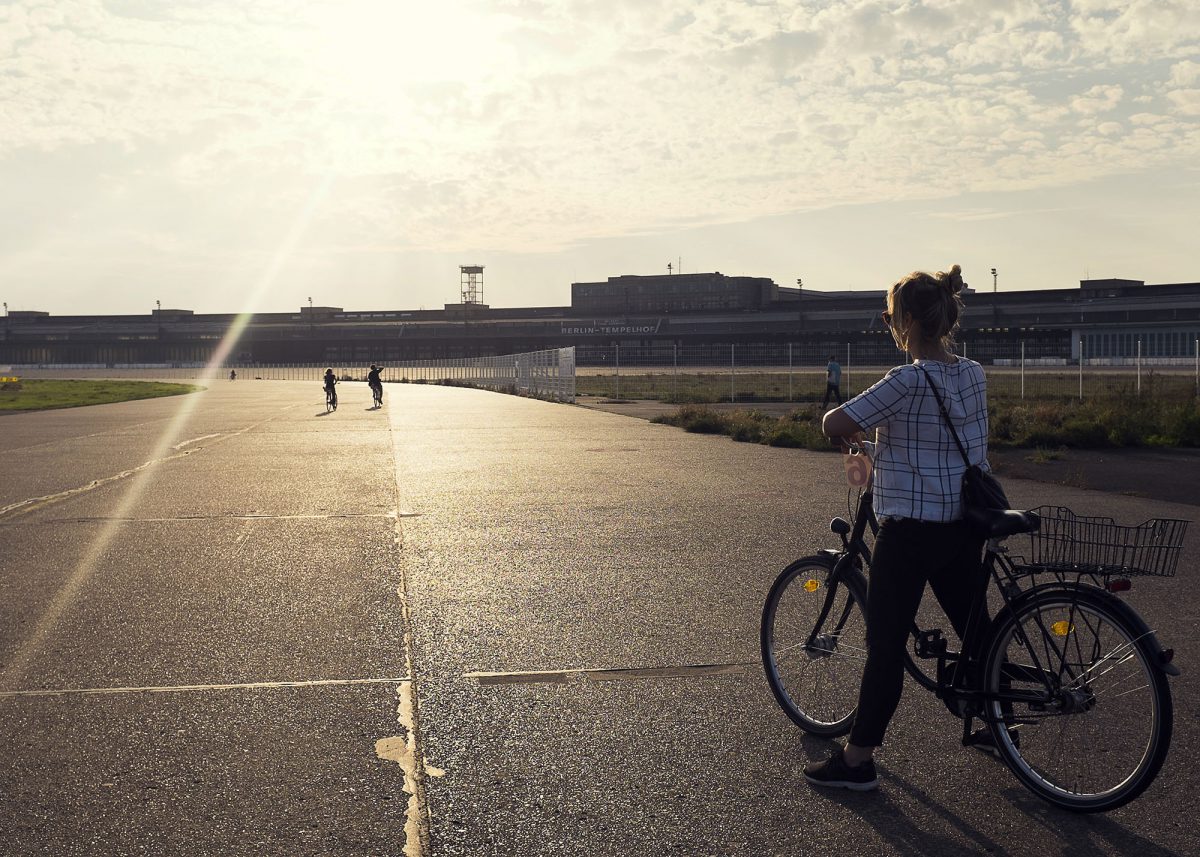 For drinks I would reccomend “klunkerkranich” wich is a very cool rooftop bar, situated on top of Neukölln arcade wich is a shopping mall. This hidden rooftop bar is spread out over the 2 upper levels of a parking lot. You have an absolutely stunning view over the city and its just amazing to hang out when the weather is nice! It is ideal to spend a sunny afternoon or watch the sunset in the evening over a beer. Sometimes they play live music.

So priceless view, friendly staff, lovely food and beverages and a great urban, chill and easy going vibe… in other words, Berlin as it should be!

If you enjoy a smaller more quiet bar to enjoy your beverages, Roamers is the place to be!
This is such a lovely bar, we absolutely adored it. The interior is exactly how we like it to be. Lot’s of wood and sustaining rustic materials and more importantly lots of greenery! We had self made lemonades but we dfenitely will go back for breakfast or cacke because they looked delicious! Their plants were so nice. They even sell some of their stuff and occasionally do a pop up succlent sale. 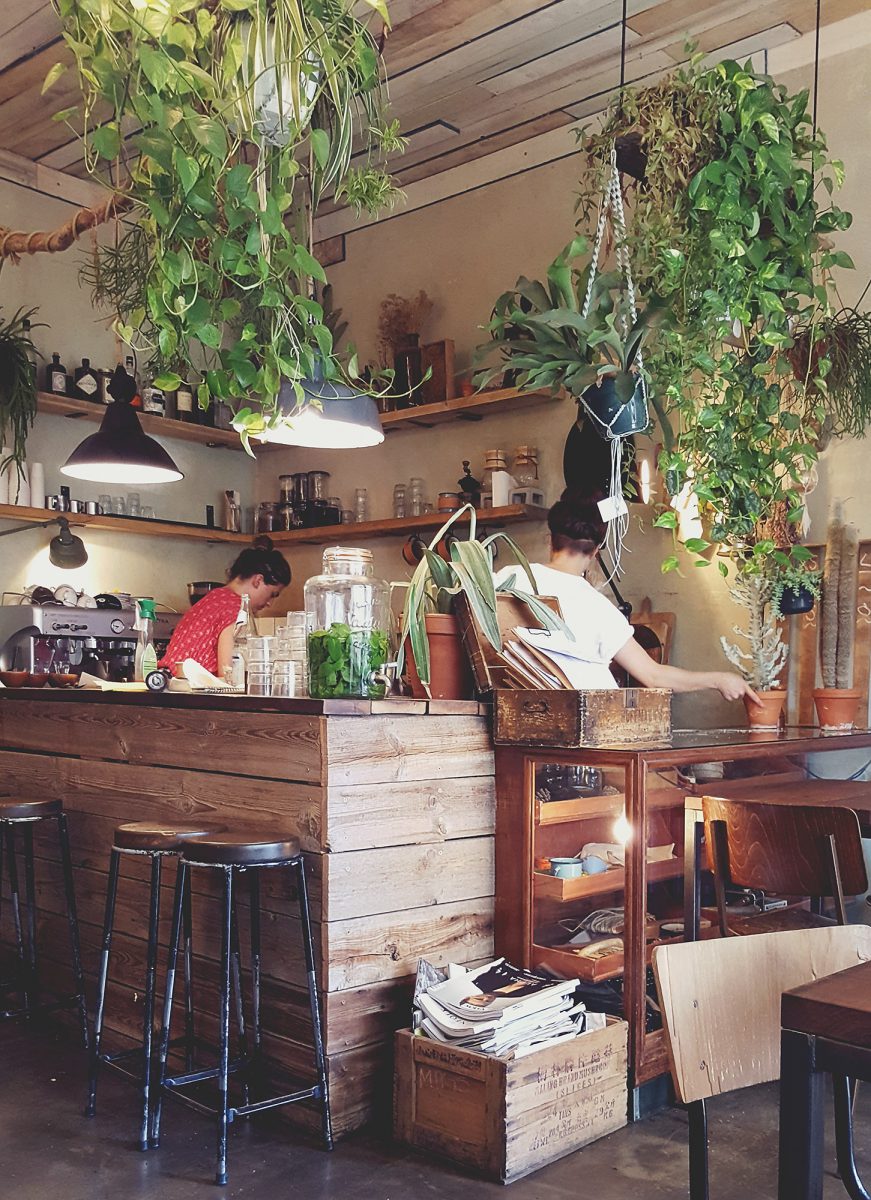 For food we loved Neni, a restaurant situated on top of the 25 hours hotel, it has a lovely view over West Berlin and the Zoo. On the menu you will find maroccan quisine but also turkish,spanish,israelic and perzian dishes and influences are combined in their platters. Next to Neni is a supernice cocktailbar which is called the monkey bar. Their motto and also their banner is ‘life is beautiful’ and when you are here, it really is ?

For Tourist attractions I have to admit I only went to see the Berlin wall and the holocaust memorial wich is close to brandenburger Tor.
I had seen a dozen of pictures of people on the holocaust bricks so I secretly wanted one for myself aswell. That been done, after an hour we took a subway to Kreuzberg, to wander around the streets again. We passed the “burgemeister” wich is very popular for its hamburgers apparently and smelled very very tempting. 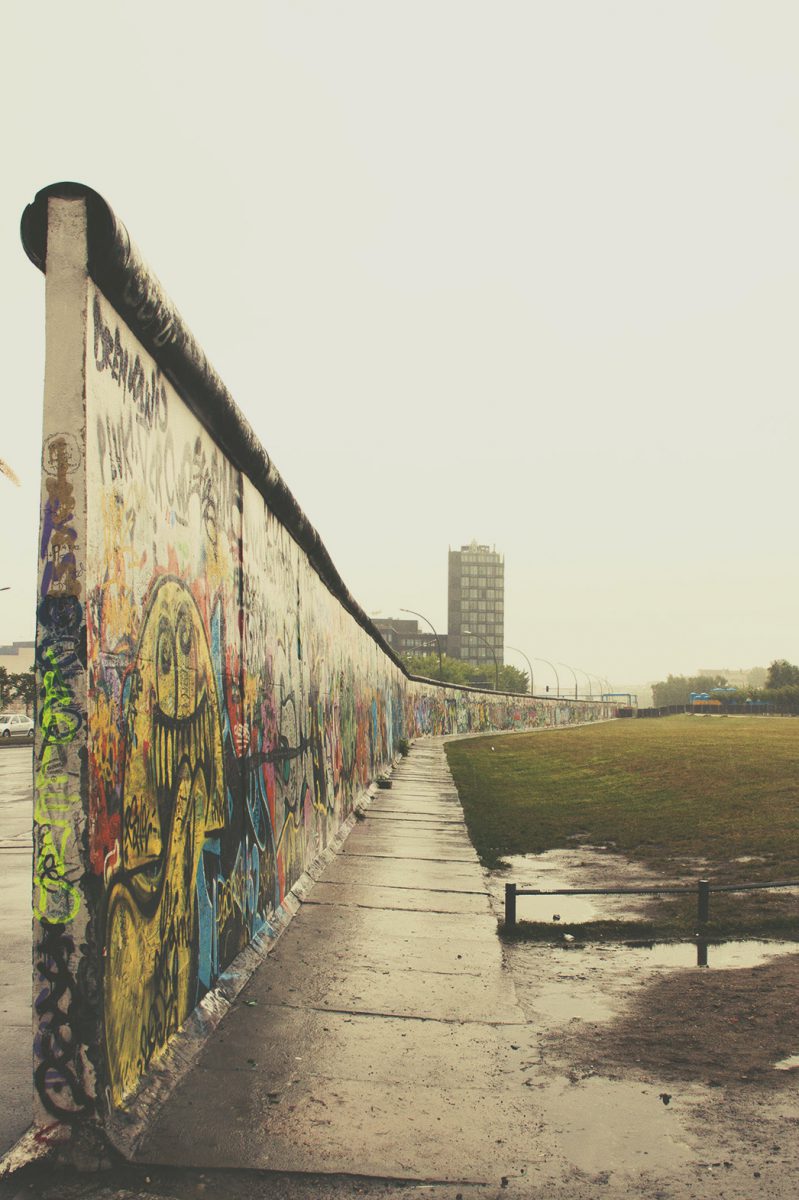 We landed in the Wrangelstrasse this streat was apparently full of lovely bars and restaurants. We chose the cutest one and had the most amazing mojito’s and nacho’s with cheese and guacamole and also bruscetta’s. The owner was so enthousiastic and prepared our cocktails with so much love, you could taste it… 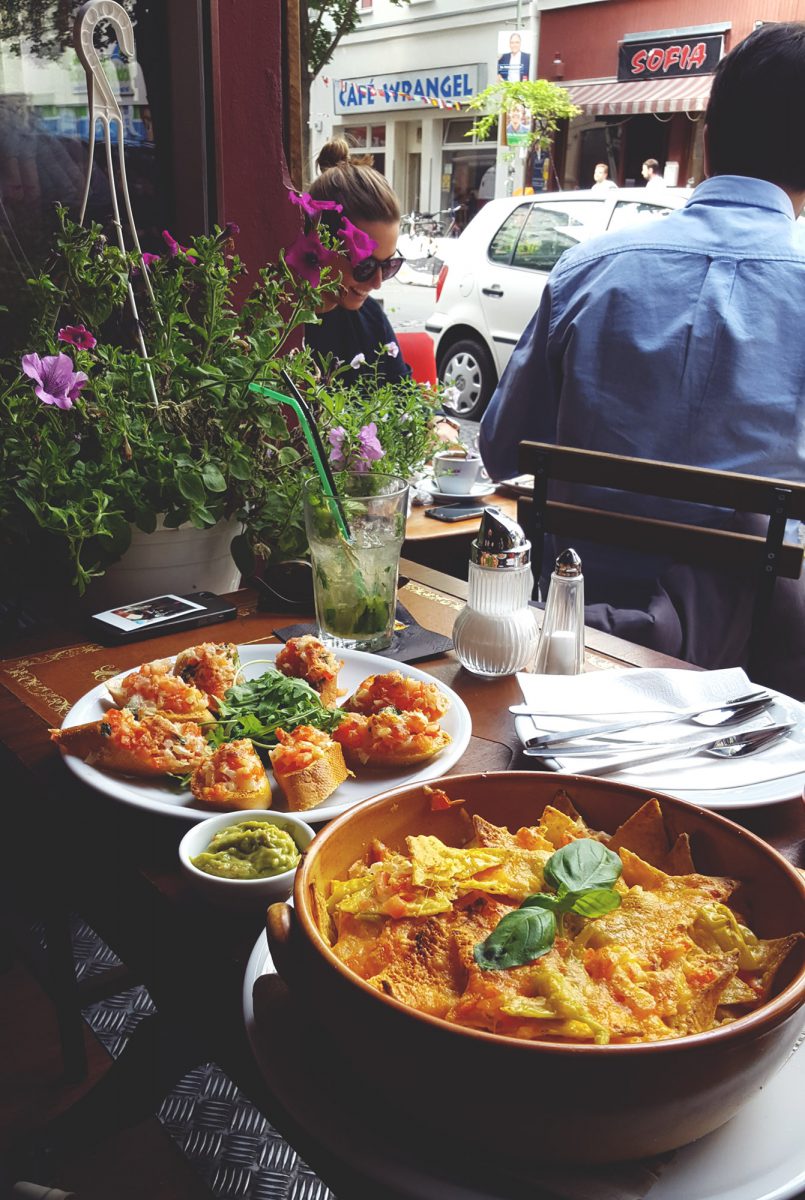 After this amazing stop it was unfortunatly time to return to the airport to head back to Belgium.
It is always dreadful to come back after a lovely trip. But this one makes me wonder about all the fascinating places yet to discover. Berlin has such a political and sociocultural history yet to explore! I enjoyed everything Berlin gave us so far, and I will definetly be back! 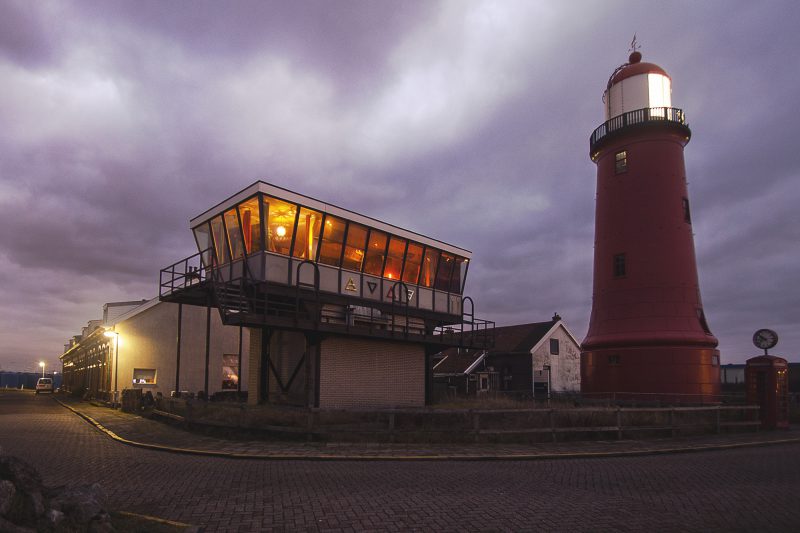